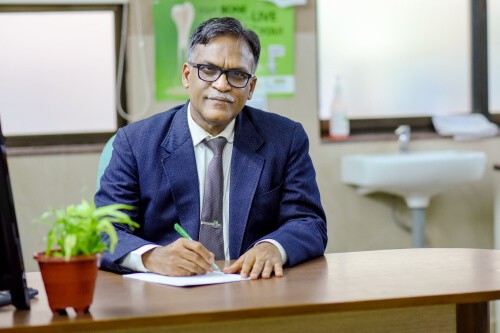 He was trained in USA , France, Brazil , United Kingdom, and Germany in various surgeries He was conferred FRCS from Royal College Of Surgeons Of Glasgow , United Kingdom in the year 2007.He was awarded honorary member of Brazil Society Of Surgical Oncology in 2015.

He has over 30 yrs of experience in Surgical Oncology and has trained more than 100 surgeons in surgical oncology, who are working all over the world today .He is one of the senior most in the country and highly regarded in India as well as abroad. He has delivered numerous lectures in international, national and state conferences. Also he has over 50 research papers. The prestigious TERRY FOX project 2001, by Terry fox run Canada was his brain child. He has presented over 60 papers in conferences all over the world and has authored chapters in 7 books.

Presently he is the President of Indian Association Of Surgical Oncology and Vice president of Ostomates India .Also he is The Vice Chancellor, Yenepoya University Mangalore.